This morning I demonstrated an inept marketing “experiment” by AlterSeekers gone awry for EMC. It involved comment spam on some of the best-known enterprise storage industry insider blogs and EMC cut it off quickly. But this analysis turned up something else rather peculiar: An apparent hack on teen chat site myYearbook to spam video links on Twitter and generate views and buzz. Amazingly, EMC are again involved. Is this another face of this morning’s off-the-rails experiment?

While exploring the fascinating world of link spam, I happened across the Twitter account of @LisaValentineNY (not linked), probably an AlterSeekers employee. I noted that the only thing she had posted recently were spammy @replies to Twitter users advertising Crucial-brand computer memory. Every reply included an odd trademark character (indicating a cut-and-paste job) and used the same bit.ly link, one created with the account of AlterSeekers employee Brent McLean. Clearly, Crucial was involved in the same type of anti-social marketing campaign as EMC.

This got me thinking. I remembered seeing some EMC videos tweeted recently, one involving former CHiPS star, Erik Estrada and another with pro golfer, Billy Andrade. They were somewhat amusing, but EMC, being an enterprise IT company, isn’t really a general audience draw. So I wasn’t surprised to see just a few thousand vides. Yet a glance at YouTube this morning shows an amazing 215k and 413k views for these videos. Either EMC’s videos really did go viral or they were wrapped up in this nasty spam business as well. 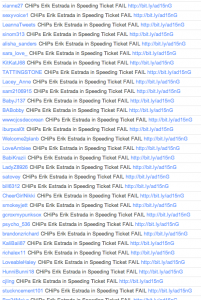 It’s easy to see bit.ly links to a given site. I just copied the YouTube URL into bit.ly and clicked on the aggregate link. This was eye-popping. Literally hundreds of tweets linked to the video, each from a different user. Yet every tweet was exactly identical:

Either a hundred random users decided to tweet the exact same message and link to their followers or something fishy was going on here.

I picked a few at random to see who these EMC fans were (try it yourself!). They appeared to be teens posting teen-speak including quotes, photo ratings, and Q&A. In most cases (that I looked at), the users had never tweeted using any client other than “myYearbook Share” which appears to be a Facebook clone that links to social media accounts, including Twitter. 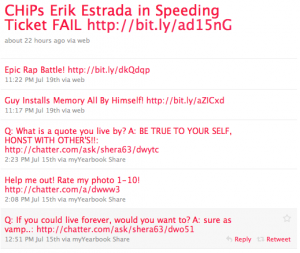 But each account also included a few exceptionally odd tweets. Along with the myYearbook junk were these spammy links to EMC’s videos. And lo and behold, most also included links the same Crucial Memory video being spammed by Lisa Valentine! What could be going on here?

This is truly weird. If myYearbook was inserting “sponsored” tweets along with their users junk, one would expect it to also come from the “myYearbook Share” client, too. But, without exception, these spam links came from “web”. This was especially notable for the (many) users who had never posted anything from the web client, and it smells like a hack.

It really isn’t credible that these random teens all decided to tweet cut-and-paste links to EMC and Crucial videos. And it really isn’t believable that they all decided to use the web client for the first and only time to do it. Either they were enticed to do it (“win a contest?”) or someone or something is posting “on their behalf”. Either way, this stinks.

Perhaps myYearbook has been hacked and someone is using users’ passwords to post these links. Perhaps the company is in on it, though there seem to be few complaints about them. Or perhaps someone is harvesting Twitter accounts from myYearbook and getting the passwords from somewhere else. Regardless, someone is doing something naughty here!

Although Crucial and EMC are linked through AlterSeekers, I’m not sure they’re responsible for these tweets. There are a few links found in many of these users’ suspicious tweets, and all were created with the bit.ly account of another company, Sharethrough (not linked). Calling itself “The Leading Social Video Seeding Platform For Top Brands And Agencies”, Sharethrough appears to be some kind of viral marketing machine. But it’s unclear if they’re responsible for all this spam, either.

At the end of the day, responsibility lies with the companies that are benefiting from these shenanigans.

Each of these companies must investigate upstream to discover what their providers are doing on their behalf. And each should inform all of us about just what is going on!

And it all started with a spam comment on my blog.

Update: Not Hacked But Seeded

I suppose it’s sometimes easier to find trouble when one goes looking for it. I received an email from Dan Greenberg, CEO and Co-Founder of Sharethrough explaining these links. His site “seeds” viral videos to a variety of platforms which invite users to share them with their friends. As Dan says, “When a user clicks Tweet it takes them to Twitter and suggests a pre-defined tweet for them, which the user can edit and then post.  This functionality is similar to what you might see on any blog or video site.”

Assuming he’s being straight with me (which I do) there was no hacking or underhanded chicanery involved in these tweets. The users shared them on their own accord. This explains why they all have identical text and bit.ly links as well as the odd “via web” source. He suggests that TechCrunch, Mashable, and others do the same.

Chuck Hollis agrees in the comments below, comparing this to the paid advertisements that some blogs (including my own) include. He goes on to suggest that it’s not so bad to pay a company to promote a video online in order to make it go viral, presumably as long as it’s not in “a blog or a focused community.”

Let me be straight: I have no problem with banner ads in general (as long as they’re not misleading) and jumped to the wrong conclusion about Sharethrough. But the core question remains: Why would an enterprise-focused company like EMC to promote their products with viral videos that apparently appeal mainly to teens? The CHiPs video was “liked” 23 times, “disliked” 10 times, and drew 22 comments with almost 250,000 views. The Andrade video has almost 415,000 views but only 25 “likes”, 6 “dislikes”, and 44 bizarre mostly single-word comments.

If these videos really appealed to people, wouldn’t they be commenting more? And if they were really hitting their target, wouldn’t the comments mention something (anything) about EMC or its products? Setting aside the issue of whether or not the method promotion is valid, surely the result isn’t what was desired. I return to my closing statement from the previous article: Isn’t fresh sushi better than canned spam?